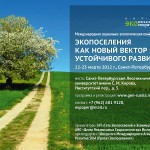 On March 22-23, 2012 Russian Ecovillage & Ecoinitiative Network conducted its next big outreach event: the International Ecological Conference «Ecovillages for Sustainable Development».
The conference took place in Saint-Petersburg Forest Technical University. It was organized in the frame of the “Ecovillage+” project sponsored by Swedish Institute, which is part of a bigger “Ecovillages for sustainable rural development” project.
The purpose of the conference was to represent the phenomenon of ecovillages and ecovillage movement to a wider audience, to show its potential and find out ways of co-operation with governmental structures, universities and eco-NGO.
About 350 people from different regions of Russia participated in the event (200 at 1st day and 150 at 2nd day): representatives from Russian ecovillages and ecovillage initiatives, regional and local authorities, eco-NGOs and initiatives (Greenpeace, WWF, Musora.Bolshe.Net and many others), students, post-graduate students and lecturers.
Two GEN-Europe council members: Robert Hall from Sweden and Toomas Tropido from Estonia were representatives from international ecovillage movement.

The conference opened with one-minute silent meditation for peace and love towards Mother Earth. Fiodor Lazutin, President of Russian Ecovillage and Eco-Initiatives Network, one of the founders of  Kovcheg  ecovillage, made the first presentation by reviewing XXI century challenges: pic-oil, deforestation, lands degradation, eco-footprint.
After this, Laysan Mirzagitova, Executive director of Russian Ecovillage and Eco-Initiatives Network, GEN-Europe ambassador in Russia, presented ecovillage movement worldwide and in Russia, as well as the Transitional Towns movement.
Antonina Kuliasova, from the Big Stone ecovillage, expert of Center for Independent Social Research, FSC expert in Russia, represented the results of 10 year research in her report «Russian ecovillages for sustainable development in rural areas». She demonstrated that nowadays the ecovillages built up by socially active people coming from the cities can become agents of empowerment for traditional villages and can contribute to their survival and transition.
After the common plenary sessions the participants could choose one of three parallel break-out sessions: on sustainable traditional technologies, on urban eco — communities and on collaboration of ecovillages and regional/local authorities. All break-out sessions included a few short presentations and longer less formal Q&A and discussion sections. The Urban eco-communities session gathered a lot of young enthusiastic people, many of them being involved in one or another way into eco-movement. They had among others, Toomas Trapido’s presentation on International action «WE WILL DO THIS!» (Clean up the world! movement), after which his Russian colleague Fiodor Tarabukin, talked about the Clean up Russia 2012 action project which will take place in forthcoming September. At the end all the participants of this session measured their footprint during the workshop organized by students of Saint-Petersburg State University from the youth organization «Laboratory of creative youth initiatives».
At the third break-out session the organizers expected to see a lot of representatives from governmental structures, but many of invited people did not come in spite of their preliminary promises. A few representatives of local and regional authorities were those with whom the ecovillages had already constructed good relationships. This showed the big importance of grass-root initiating of the dialogue with authorities and policy-makers.

Toomas Tropido opened the second day plenary session with the report on GEN and Gaya Education, which was followed by Robert Hall’s presentation on Swedish ecovillages (Robert himself was at the conference not only as GEN-E council member but also as a resident of Swedish Syderbyn ecovillage). The plenary was concluded with a brilliant presentation by Dmitriy Vatolin, from Kovcheg ecovillage on Russian forest ‘burning’ issues and two stories of defense of the forests surrounding his ecovillage from cutting by Kovcheg ecovillagers.
Second day break-out sessions were dedicated to educational role of ecovillages, to eco-construction techologies, and to the ways of participation of local people in sustainable forest management.
The results of the discussions on break-out sessions were presented at the concluding general meetings of, accordingly the first and second day. Two sections developed resolutions: on traditional technologies and rural policy, and on sustainable forest management.

I would like to finish by citing Toomas’s words which he wrote in his letter after coming back home: “The conference was really a great event! I was so happy to see so many people from different villages, initiatives and cities. The atmosphere was great and spirit of cooperation was there”. Thank you Toomas for kind words and for coming! Thank you many-many people who contributed to the conference organization and conducting!

For resolutions, photo and video materials of the conference, please, go to: www.gen-russia.ru.

Link: not published in the Internet.

The video materials from the conference: